My ebooks The Passion Killers, A Dark Wind of Vengeance, Blood Beyond the Abyss and The Second Layer of Hell (apocalyptic fiction) are now available for download. They are the first four installments in the Path of Survival series. To see additional information, click here .

"A strange thing happened on the way to Canada. We were attacked by a grouse. I mean, an upset, fearless, in-your-face, unflinching, determined, male grouse with an attitude. Apparently, he had staked out a section of the sandy trail as his domain, to be used for mating and defended at all costs." - -From Rainmaker's journal of Sept. 17, 2001 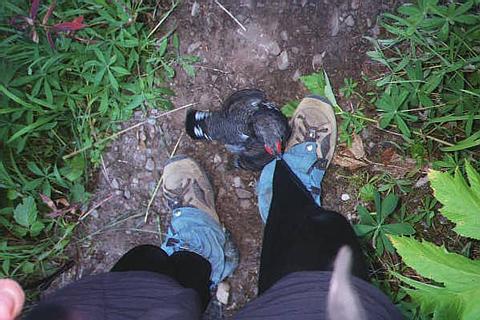 This page will be used to post humorous trail stories, tales of misdaventure and any other articles that are of a lighthearted nature. If you have an article / story that you'd like to post here, please send it to me as e-mail at: